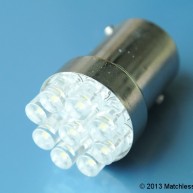 A super compact LED stop and tail light measuring only 31mm long for 12 volt negative earth vehicles with small tail lamps. It features 9 bright red LEDs arranged in a circular array and mounted to a standard BAY15D (1157) base. Also available in a cool white LED version.

This super compact 12 volt LED light is the perfect choice for installation in tail lamps where space is limited, and in particular the early pre-war Lucas MT210 and MT211 rear lights. It measures just 31mm long and 19mm in diameter at its widest point, so it is significantly smaller than all of our other LED units and also barely bigger than the BAY15D (1157) base itself.

For larger rear light units we recommend either our 12v super intensity or 12v high intensity LED tail light units as these provide superior illumination of both the lamp and number plate.

The lamp is a dual-intensity LED array which means that all of the LEDs light up for the tail light function, and then they all illuminate even more brightly when the brake is applied. Clearly the brightness of this compact LED unit will not be as much as the larger models we offer which have a greater number of individual LEDs. It does however provide more than adequate illumination of small tail lamps for a fraction of the power consumption of a conventional bulb.

It has the standard BAY15D dual contact offset pin base which is sometimes also known as the 1157 fitment. Note that it is only compatible with negative earth electrical systems.

We have two versions of this LED unit available with either red or white LEDs. We recommend the red LED version for most applications as this gives a brighter red light through the red plastic lens of most tail lamps. The white LED version isn’t quite so bright as some of its output if filtered out by the red plastic of the tail lamp’s lens and it also makes the lamp glow a more pinky colour. It does however give better illumination of the rear number plate if that is a concern for you. The red version is also a little cheaper. Both versions look identical when the LEDs are not illuminated. Click on the ‘Help me choose’ tab above for more information concerning the relative merits of using red or white LED lights.

We sell a number of different stop and tail light bulbs and we realise that choosing the right one for you bike may be a little confusing. So we've put together this short guide to make it a little easier. Whichever LED light you choose you can rest assured that we only sell the best units available and that we have tested them all in terms of quality, fitment and brightness. So you can be sure it will fit properly and be nice and bright! Not all LEDs are created equal, even if they look the same as the high quality ones available here.

The choice of LED lights for 6 volt electrical systems is limited, which is a shame as it is older 6 volt vehicles that can real benefit from their significantly lower power consumption.

If you have a classic bike fitted with one of the standard Lucas tail lamps, then one of our classic LED light boards is by far and away the best option for you. These work with both positively and negatively earthed electrical systems and give the best illumination of the rear light unit (better even than an uprated filament bulb!) with incredibly low power consumption. They are however not yet available for all Lucas rear lamp types.

For all other applications we offer an extra bright 19 LED light unit to replace the standard filament bulb. These should fit all rear light units which take a standard BAY15D (1157) twin filament bulb.

A much wider choice of LED lights are available for 12 volt vehicles, but there is a great deal of variation in terms of quality and brightness. We have tested countless different types alongside the custom LED boards we make ourselves, and we sell only the best quality brightest units.

If you have a classic bike fitted with one of the standard Lucas tail lamps, then one of our classic LED light boards is by far and away the best option for you. These work with both positively and negatively earthed electrical systems and give the best illumination of the rear light unit (better even than an uprated filament bulb!) with incredibly low power consumption. They are however not yet available for all Lucas rear lamp types.

If your vehicle has any other type of rear light unit fitted, then our 12v super intensity stop and tail light LED unit is the next best thing. This is incredibly bright and looks just like a normal filament bulb with a glass dome containing an array of 36 separate LEDs pointing in all directions to give 360 degree illumination. This is great for lighting up the tail light as well as the number plate. The LEDs are a warm white colour so the light looks just like that from a standard filament bulb.

A slightly cheaper option are our 12v high intensity stop and LED tail lights. These feature a single 1 watt wide angle LED contained within a glass globe which closely resembles a conventional bulb. The single LED focusses more light directly out of the lamp giving bright stop and tail lights, although number plate is not quite as good as the 12v super intensity LED unit.

For very small tail lamps we also offer a very compact 9 LED light unit which ideal for some of the early pre-war Lucas rear lamps. The small size of these LEDs limits their overall brightness, but they are certainly enough to light up a small rear light unit. For larger rear lamps we would recommend one of the larger LED lights described above.

LEDs are polarity sensitive which means that they need to be connected the right way around to the battery. It is therefore essential to check whether your bike is wired with a positive or negative earth electrical system (i.e. which battery terminal is earthed to the motorcycle's frame) before making a purchase.

Some of our LED units (including all of our custom LED light boards) have internal circuitry to correct the polarity of the power supply. Others will only work with the correct polarity of motorcycle, so check the description carefully to ensure that a particular LED unit is suitable for your vehicle.

We supply a range of LED lights that are available with either red or white LEDs. We normally recommend the red LED version for most applications as this makes the red lens of most rear lamps appear both brighter and a deeper red in colour. Red and white LEDs both emit roughly the same amount of light, but red LEDs do this in a very narrow frequency band (the red part of the colour spectrum) whereas white LEDs emit light across the whole visible spectrum.

The red plastic lens found on most rear lamps filters the emitted light and removes a significant portion which is not in the red part of the colour spectrum. So the light emitted by a white LED in the blue and green parts of the spectrum are blocked and in effect wasted. Nearly all of the light emitted by a red LED makes it through the red plastic lens, therefore the tail lamp appears to be brighter. This is why we normally recommend installing a red LED unit in a red rear lamp.

However some rear lamps are also used to illuminate the rear number plate via a clear lens beneath the main red lens. Installing a red LED in such lamps means that the number plate is illuminated with red light and so it not as bright as it would have been had a white LED light been installed. The design of the rear lamp will also have a significant impact upon the quality of the number plate illumination, but for most people, visibility of the tail and stop lights is usually more important than lighting up the number plate. A white LED lamp can also sometimes make the rear light appear more of a pinky colour, whereas a red LED emphasizes a deep red colour.

We therefore offer both red and white LED lights so that you can select the most appropriate colour for your particular application. Usually a red LED gives better stop and tail light functions and a white LED gives better number plate illumination.