A completely redesigned version of our 12 volt LED light array designed to fit Lucas 564 type rear light units.
Home > Store > LEDs for modern bikes > 12v Lucas 564 LED light board kit
Contact me We're currently making some changes to the website and I'm afraid that this means we are temporarily unable to accept any new orders. Apologies for any inconvenience caused and please check back again soon. 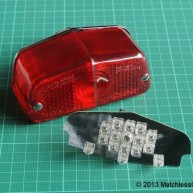 Specially designed for a perfect fit inside a Lucas 564 style rear lamp unit, this 12v LED array features tail, brake and numberplate illumination using an array of super-bright wide-angle red and white LEDs. This kit includes the LED board, a custom designed plugin adapter and everything you need to install it into your existing rear light unit.

Our Lucas 564 style LED board has now been completely redesigned for 2014!  The new model features extra LEDs for even more brightness and now requires no modification of the light unit to install it.  It just plugs straight into the existing socket so upgrading to an LED rear light is now just as simple as changing the bulb.

This fantastic new 12v LED light board has been specially designed to fit perfectly inside the red outer lens of the classic Lucas 564 style rear motorcycle lamp which is commonly retrofitted to many modern motorcycles and custom bikes. It replaces the standard filament bulb giving a huge reduction in power consumption, increased reliability and improved visibility.  Of course it looks pretty good too!

The latest version of the 12v LED light boards has been completely redesigned to make them even better. The first thing you will notice is that the LED board has been reshaped to match the outline and contours of the Lucas 564 rear lights.  As well as ensuring that the LEDs are seen at their full brightness, the mirror finish of the LED board also improves the performance of the reflector elements built into the red lens of the lamp.

The LEDs are still powered by our unique current controlled circuitry to ensure they operate at maximum brightness regardless of battery voltage or engine speed.  However we’ve managed to squeeze in an extra two red LEDs to give an even wider and brighter illuminated area.  The original LED board easily matched the brightness of a standard 21/5W filament bulb, so the new design is even more visible.  Additional circuit protection, polarity correction and current limiting devices have been included to ensure that the sensitive LEDs are safe even if you connect them wrongly or your bike’s electrical system goes wrong.

The low power consumption of these light units eases the load on your motorcycles electrical system.  This can improve fuel efficiency (since less engine power is needed to power the alternator), especially for bikes which permanently have their lights on.  Alternatively the LED boards can free up some power for additional electrical accessories that you may wish to install.

The LED light board is designed to operate with both positive and negative earth motorcycles overcoming the polarity issues common to many other such lights. Inbuilt circuitry automatically ‘corrects’ the polarity and safeguards against any possible wrong connections by the user. The redesigned LED board comes with a custom designed plugin adapter that makes installation (almost) as easy as changing a bulb.  You just remove the filament lamp, plug in the adapter in its place and screw the LED board into that.  No drilling, cutting or rewiring of the lamp unit is available and you can easily swap back to a conventional bulb at any time if needed.

Light emitting diodes offer many benefits for classic motorcycles as is discussed in detail on the advantages of LED lighting page. The main advantage is that power consumption is a fraction of that of a conventional bulb. Our rear light boards draw less than 140mA of maximum current – that’s only about 6% of the current needed by a normal 21+5 Watt bulb. The LEDs are brighter too!

These LED light units have been designed to the highest ‘Matchless Clueless’ standards and specifications. Other LED units use resistors to control the voltage to the diodes as this is cheap and simple. However it does not properly control the current flowing through the LEDs over the surprisingly wide range of voltages which can be expected from a 12v nominal charging system. This can lead to dim LEDs and low visibility if the battery needs charging, or the diodes burning out if the voltage rises too high when the battery is being charged.

Instead our light boards use sophisticated microchips to precisely control the current supplied to the LEDs irrespective of supply voltage fluctuations. They therefore operate at peak performance and brightness over all battery charge states. In fact they will get you home safely even in the event of a complete charging system failure as the LEDs will continue to glow brightly even when the battery is too discharged to light up the other bulbs on your bike.

Full fitting and installation instructions are available to view online in the Lucas 564 light installation guide. Please take note of my comments regarding LED lighting and the law.

The only tools required to install the LED board are a 2.5mm Allen key and a 7mm spanner.  These are available as optional extras for only £2.20 by ticking the option box at the top of the page before clicking the ‘Buy it Now’ button, just in case you don’t already have them in your tool box.